According to WitsView, the panel research division of TrendForce, large-sized panel shipments in 1Q12 amounted to 1.71 million units with QoQ decline of 3.1 percent.

Shipments of netbook below 12.1” appeared a 15.5 percent QoQ growth with the help of downstream vendors’ inventory restocking, while the shipments dropped by 20.2 percent YoY due to tablet PCs’ taking over the market. Tablet PC shipments in 1Q12 slid by 0.9 percent QoQ due to two factors:
1) Apple’s New iPad panel were in short supply, resulting from yield rate issue raised in the transition from iPad 2 to the new iPad, and
2) non-Apple campaigns mostly launch their new models after the 2nd quarter.

However, a surging YoY increase in tablet PC panel shipments indicates that tablet PCs are continuously taking over other brands’ laptop sales in terms of prices and functions.

Meanwhile, with the sequential trends in developing high resolution panels, tablet application market has been expanded from personal entertainment to education market, and is expected to further dominate commercial tablet market with the introduction of Windows 8 in 2H12. As a result, the overall growth momentum of tablet PC is projected to persist.

Source: WitsView, Taiwan.
Posted by meki at 2:13 AM No comments:

RIO's proprietary external-cavity semiconductor laser is packaged in a standard 14-pin compact "butterfly" package and produces a single-frequency output with a linewidth less than 2 kHz, ultra-low phase and relative intensity noise, and high immunity to vibrations, all under a wide range of operating temperatures.

"Our partnership with NASA in the development of superior laser sources for the next generation space LIDAR instruments has reached a new stage with this award which will enable RIO to expand its narrow-linewidth laser product line to 1064 nm," said Dr. Radu Barsan, chairman, president and CEO of RIO. "We are very proud of the confidence NASA has placed in RIO's game-changing technology and we are strongly committed to providing the best-in-class lasers for LIDAR applications in the aerospace, atmospheric, and wind energy markets."

Soon Kwon, MD LGEIL, said: “Technology and design are key factors behind LG Home Entertainment products. With our 2012 CINEMA 3D Smart TV line-up, we have been able to take a significant step forward, thanks to a series of new and upgraded 3D features led by the CINEMA SCREEN Design.”

The CINEMA SCREEN Design translates the latest advances in LG’s Flat Panel TV technology into an aesthetically superior form. The Bezel that surrounds the new CINEMA 3D Smart TVs has been slimmed down to negligible levels (1 mm), creating a more optimal and comfortable environment for immersive 3D viewing. The picture goes virtually from edge to edge.

Talking about targets, he added: “With 2012 Olympic to be broadcast in 3D and more than 30 English and Hindi 3D movies to hit Indian Cinemas hall, 3D entertainment is set to explode in India at a steady growth of 500 percent. We are targeting business worth Rs. 1,000 crore from 3D TVs and aim to consolidate our position in the Flat Panel TV segment with 30 percent market share. To ensure the numbers we have an aggressive marketing strategy with a target investment of Rs. 100 crore in flagship product communication. This will be accompanied by experiential marketing campaigns.”

The new range of CINEMA 3D Smart TVs are accompanied by new CINEMA 3D glasses for 2012. Presented in four elegant series, the new glasses are 20 percent lighter than the previous ones, which were already the lightest in the industry, thus increasing comfort of users to watch countless 3D content for hours at a stretch.

Gamers will no doubt welcome the inclusion of Dual Play feature. For, it includes special glasses which allow two players see only their perspectives simultaneously on the full screen at once without having to split the screen. This elevates the gaming experience a full notch up, truly an encounter of the first kind.

Immersive 3D experience is accompanied by 3D audio in new range of Cinema 3D smart TVs. 3D Sound Zooming generates 3D sound that is synchronized with the displayed 3D content, allowing users to not only see, but also hear in 3D. The TV also boasts of innovations like Intel’s WiDi (Wireless Display) technology that enables easy and fast connection between TVs and PCs without requiring any internet, wires or wireless network.

One of biggest hits in 2011, LG’s Magic Motion Remote Control, is even more magical this year. With 3 enhanced modes – Pointing, Gesture & Wheel - it allows users to easily control their Smart TVs.

CHENNAI, INDIA: Samsung Electronics announced the launch of its new, more interactive and intuitive Smart TV models - its flagship LED ES8000 and ES7500 series and the Plasma E8000 series in the Indian market. 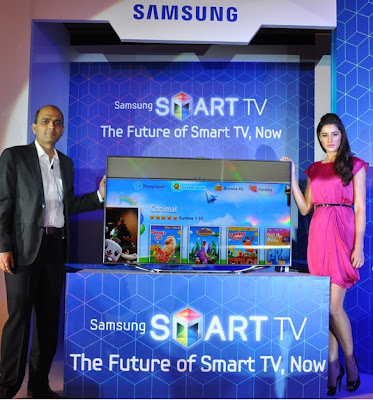 Users can turn the TV on or off, activate selected apps or search for and select content in the web browser—all without touching the remote. The Samsung 2012 Smart television series feature a built-in camera that recognizes movement in the foreground, as well as microphones that recognize voice.

Announcing the launch of the Samsung 2012 Smart television series, Raj Kumar Rishi, VP & Business Head, Audio Visual Business, Samsung India, said: “Samsung’s global leadership in televisions has rested on our continued thrust on innovation and excellence. In India too, we have been the first to introduce the latest, innovative technology products such as LED TVs, 3D TVs and now 2012 Smart Television series. Samsung’s 2012 TV and AV strategy rests on three pillars: Smart Interaction, Smart Content, and Smart Evolution, and our 2012 Smart television range exemplifies the same. I am confident that the new Smart television range will help us create new segments and further fuel the growth of the flat panel television market in India.”

As the Smart TV platform of choice, Samsung provides consumers access to the widest variety of premium content available, with over 1,500 apps offered worldwide. In 2012, Samsung is taking content one step further and evolving the way consumers discover and access apps—through a new Smart Hub that features a simpler, more personable UI in Full HD. Samsung’s Smart TVs also provide a much faster Smart TV experience powered by a new dual-core processor.

Further, Samsung’s AllShare Play, the essential tie between Samsung’s products, content and services allows content to be pushed or pulled—regardless of the user’s location—from device to device and device to cloud for limitless sharing. AllShare Play enables consumers to push content manually to the cloud or pull the content directly from their Smart TV or other mobile devices.

Further, Samsung has strengthened its Smart TV content experience through the introduction of new exclusive services. The first-of-their kind services allow for easier content sharing among families across TVs and a number of connected personal devices.
Posted by meki at 3:10 AM 1 comment:

INDIA: Alienware, Dell’s high performance PC gaming brand, is taking the mobile gaming experience to a new level with its enhanced gaming laptop portfolio that lets gamers choose a system that best fits their mobile lifestyle. The enhanced systems include: the M14x, the most powerful 14-inch laptop in the universei, for the gamer who requires a balance between mobility and performance; and the 3D-capable M17x for top performance with an immersive high-definition, surround-sound sensory experience.

High-performance mobile gaming
A perfect balance of performance and mobility, the Alienware M14x allows gamers on-the-go to experience uncompromising gaming performance. The M14x features optional dual drive configurations, up to 16GB of memory[iii] for extreme multitasking, a Blu-ray combo optical drive, and an NVIDIA GeForce GT 650M graphics engine with GDDR5 graphics memoryiii – the most advanced GPU in a 14-inch form factor and the first time Alienware is offering GDDR5 graphics on a laptop of this size.

The Alienware M17x immerses the customer in the game with every dimension, pixel and sound, for a bigger, richer gaming experience. The M17x delivers the latest NVIDIA graphics card options, up to 32GB of memoryiii, optional 17.3-inch 120Hz WideFHD WLED 3D display, and THX 3D surround sound. It is one of the first laptops to offer the latest GDDR5 NVIDIA GeForce GTX 660M and 675M graphics solutionsiii.

“Our customers want the most immersive gaming experience possible, and we’ve taken the all-powerful M14x and M17x laptops and made them even better, delivering the latest technologies for almost every need,” said Shishir Singh, director – Product Marketing, Dell India. “We’ve always offered the latest technology for the best gaming experience possible, and our enhanced lineup will let you ‘pwn’ any competitor and provide the sensory experience that we know you crave.”
Posted by meki at 2:17 AM No comments:

TAIWAN: According to the Worldwide LCD Monitor Shipments Report from WitsView, the research division of TrendForce, both global top 10 LCD monitor brands and SIs’ shipments enjoyed a continuous growth in Mar-12. Shipments of brand vendors amounted to 11.64 million units with MoM increase of 5.1 percent, while SI shipments reached 12.27 million units with a surging MoM of 8.1 percent.

Brand vendors’ overall shipments continued to increase as Samsung, the leading brand vendor, launched new models mostly in Mar-12 while some retailers in the U.S. restocked their inventory. A continuous uptrend in SI shipments was due to three factors:
1) some of the February’s orders being postponed to March,
2) there were relatively more working days in Mar-12,
3) some brand vendors’ were launching new model.

However, both brand vendors and SIs’ shipments in Mar-12 surged while their shipments fell by 12.4 percent and 14.4 percent YoY, respectively, unveiling a still-fragile terminal demand that cause downstream vendors to be cautious about inventory preparation.

Anita Wang, TrendForce’s analyst, indicated that only few brand vendors have stocked up their inventory aggressively in preparation for panel makers’ plan for a price increase, while some brand vendors have replenished their inventory based on sizes needed. For instance, Samsung’s attitude towards inventory stocking is likely to turn aggressive for its largest panel supplier is having adjustment in product capacity distribution.

Due to limited price uptrend in LCD monitor panel and the lack of strong end market demand, the remaining majority of downstream LCD monitor brands, after evaluating the capital and room it might take for stocking up, have adopted wait-and-see attitude instead of aggressive stock preparations, leading brand vendors’ shipments between Apr-12 and Jun-12, expected to peak at Jun-12, which is closer to a high season. 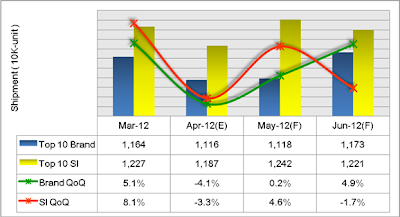 Source: WitsView, Taiwan.
Posted by meki at 11:16 PM No comments:

LONDON, ENGLAND: OEM connected car system shipments are expected to grow from 8.22 million in 2012 to 39.5 million in 2016. While the United States and Western Europe remain the leading regions, car OEMs such as GM, Toyota, Nissan, Hyundai, and Mercedes Benz increasingly look to China as the next major expansion area for launching connected car solutions in order to maintain or enhance their competitive position in this fledgling market.

Dominique Bonte, vice president and group director, telematics and M2M, comments: “Clearly the automotive industry has moved on from looking at telematics and connected car solutions as a nice premium add-on option to seeing bringing connectivity to the car as an essential tool to create more value to the end user, driving loyalty via advanced CRM-based customer experience tools and strengthening their overall branding and positioning in an increasingly competitive market.

“In the US, connected car solutions have already become a must have – the dynamics of which were set in motion by Ford - with almost every single OEM now having launched solutions including Chrysler, coming to the party rather late with their enhanced Uconnect offer.”

While connected automotive infotainment continues to steal the limelight, traditional safety and security functionality remains important from an OEM perspective, due to either historical reasons (US – GM OnStar) or driven by mandates such as eCall in Europe, ERA-GLONASS emergency calling in Russia, and the Contran stolen vehicle legislation in Brazil. Finally, usage based insurance (UBI) – aka insurance telematics – is making a strong comeback.
Posted by meki at 8:07 AM No comments: